FREE, LIVE WEBINAR APRIL 18 AT 11AM ET: HOW TO BE PRODUCTIVE EVERY DAY! 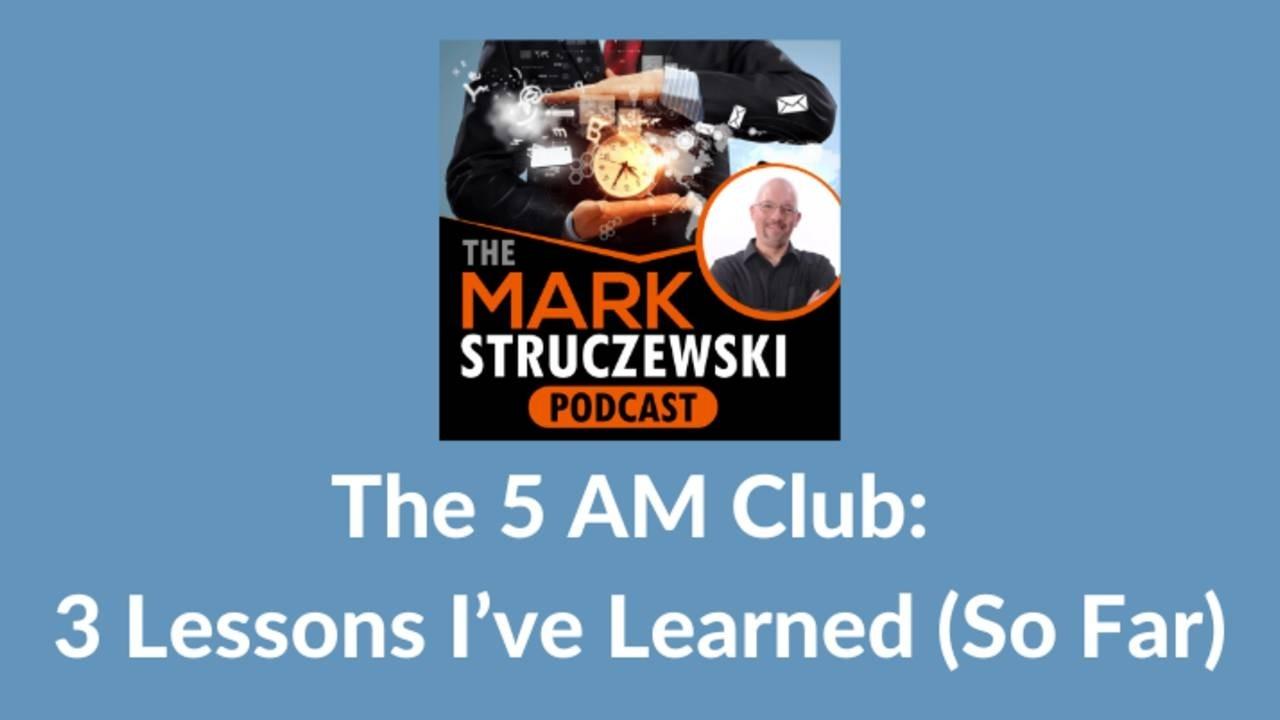 On February 3, 2020, I decided to commit to joining the 5 AM Club. Not one to procrastinate, I officially joined the next day. Here are 3 lessons I've learned (so far).

Why You Need to Disable Your Email Autoresponder 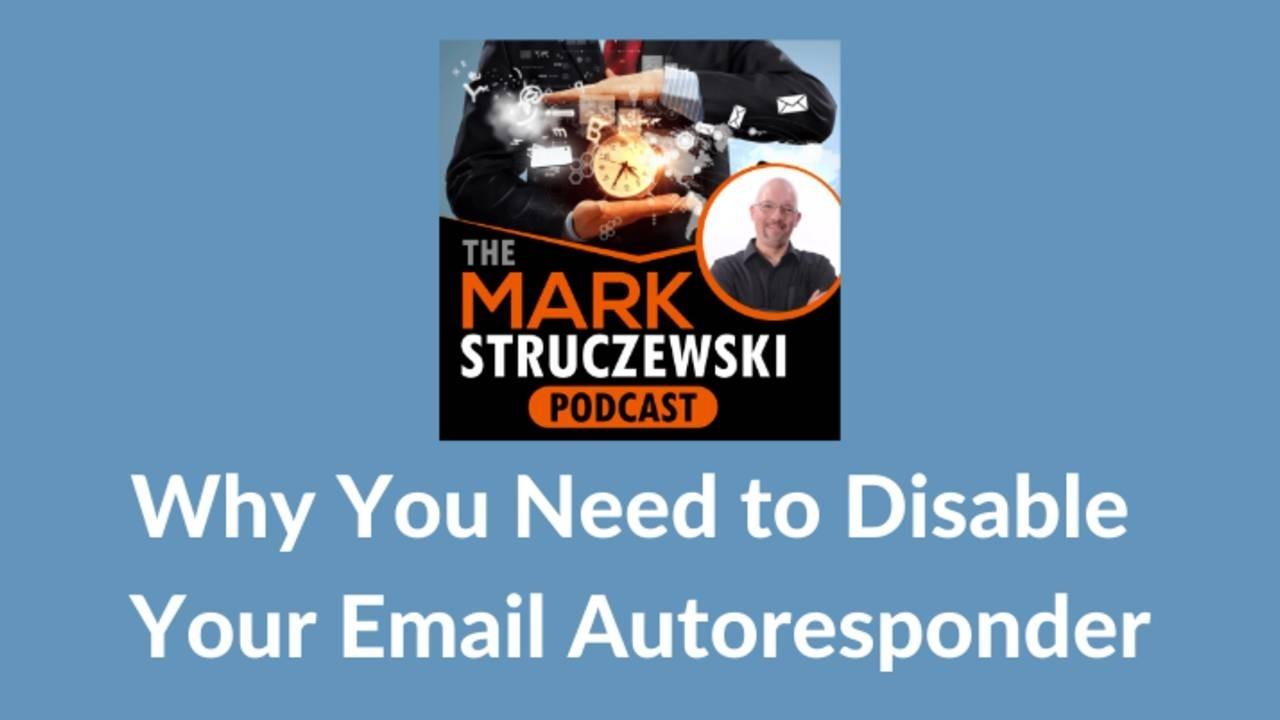 Do you use an autoresponder (also known as an autoreply) for your email? You're not alone. Many people do. In this episode, I share why you should stop using it.

Did I REALLY Join The 5AM Club? 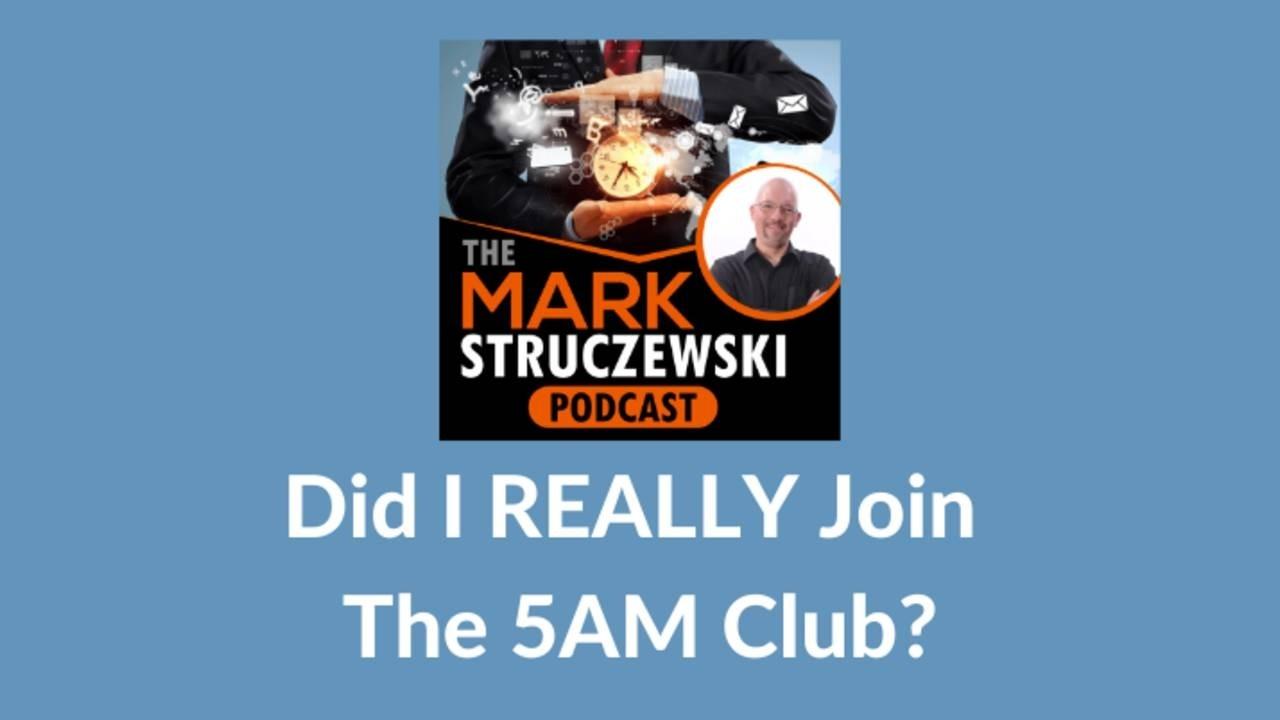 On February 4, I officially joined the prestigious 5 AM Club. In this episode, I share a BIG challenge I'm dealing with. But, fear not! I will overcome this...in time!

The 5 AM Club: Own Your Morning. Elevate Your Life - Robin Sharma (affiliate link)

Why We Sleep: Unlocking the Power of Sleep and Dreams - Dr. Matthew Walker (affiliate link)

4 Rules For Life That Will Serve You Well

Rules are everywhere. But what about rules for life? In this episode, I share with you four rules I live by that have served me well.

Reflecting on 500 Episodes of the Show! 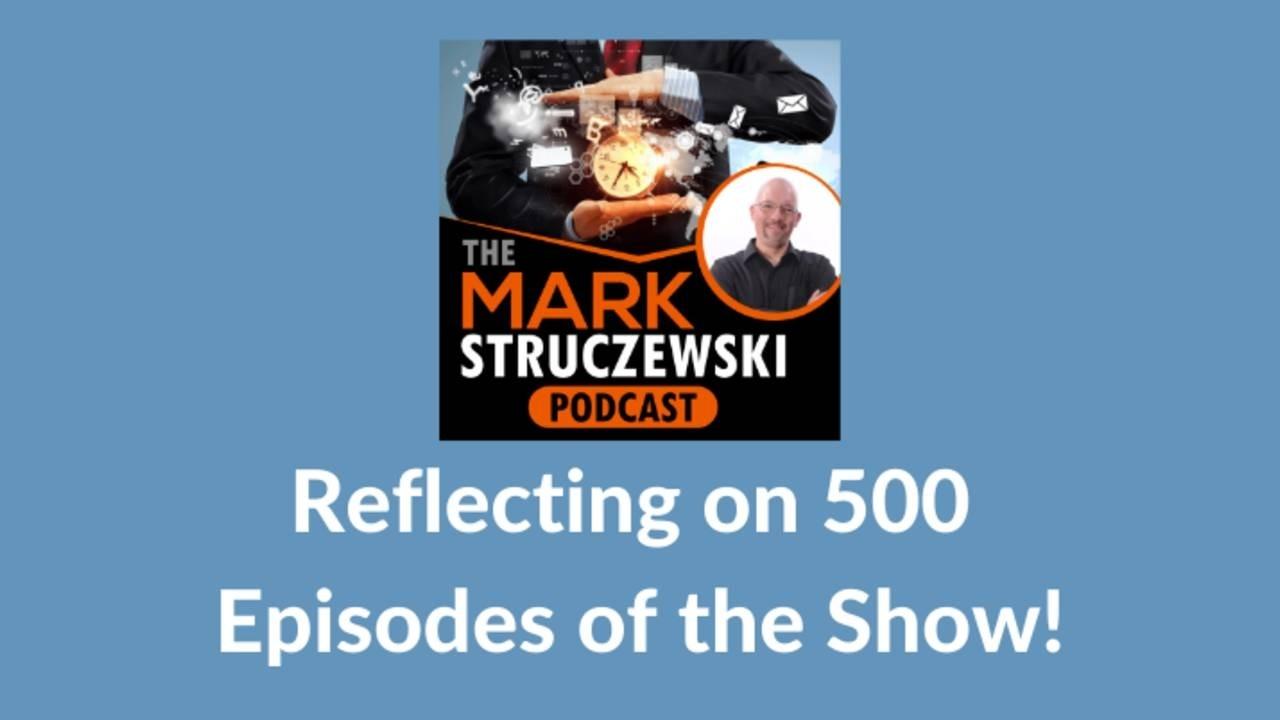 938 days ago, I launched The Mark Struczewski Podcast. Now, 500 episodes later, I reflect on where I started, where I am and where I plan on going.

How to Improve Your Attitude

Today I want to teach you four big ideas about how to improve your attitude. Your attitude has more to do with your productivity than you've realize.

Let's jump right in and talk about the first idea: assessing your attitude.

I may be dating myself here, but when I grew up, there was a cartoon called Winnie the Pooh. And Winnie the Pooh had several characters on it. But three of the characters, one was Winnie the Pooh, who was a happy go lucky bear, that got along with everyone. And all he wanted to do was have fun and go to the bee infested beehive, because that's where bees hang out, and scoop up some honey and eat the honey and just enjoy life.

And then there was Tigger, who was Winnie the Pooh magnified. Some people would say that I am Tigger. I'm this annoyingly optimistic everywhere every day.

And then there's Eeyore. Poor Eeyore. He was, "woe was me. It's not going to work out. Why bother?"

And I want you to think to yourself: do you relate more to Winnie the Pooh? Are you... 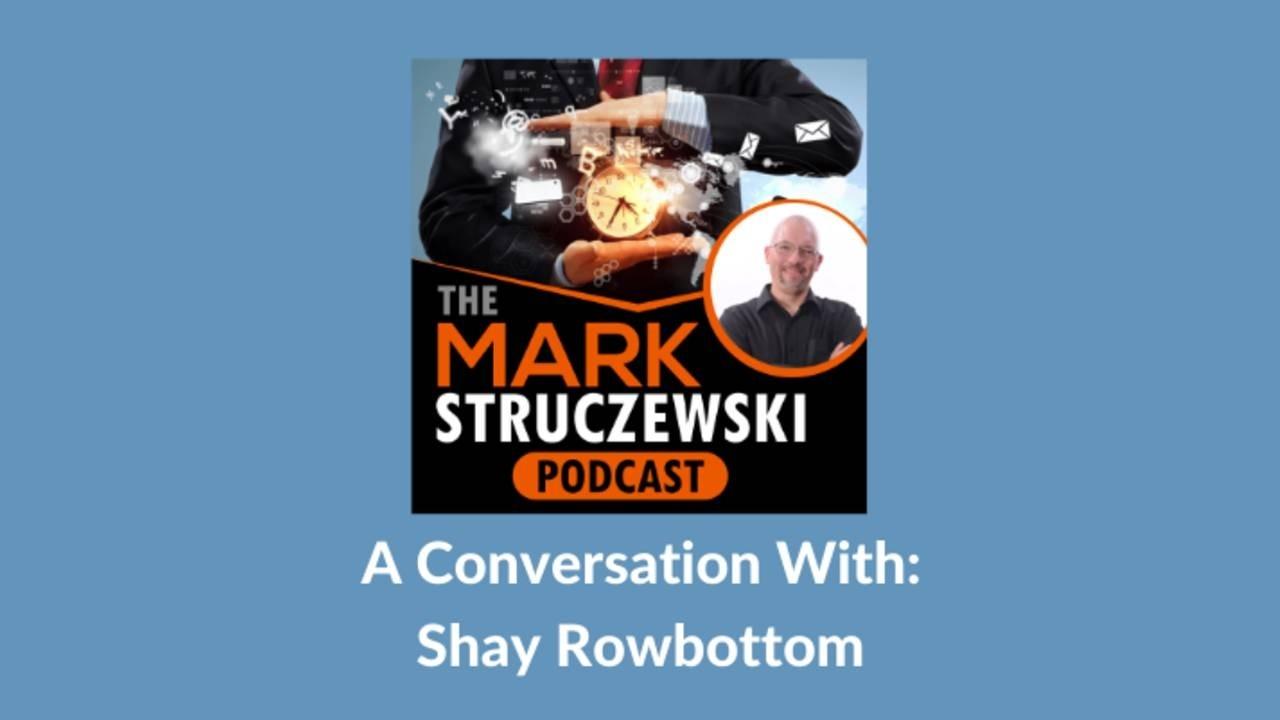 Shay Rowbottom is the co-founder and former COO of a Facebook agency that worked with companies like PetCo, Yahoo, Verlo and dozens more in creating content and devising content strategies for social media. Since joining the LinkedIn platform in May of 2018, Shay has grown to over 180,000 followers, garnered over ten million views on her content, and generated seven figures in sales for partnering media companies. Now, she's ready to share her strategies with you and produce the same kind of results for your brand.

On this episode, we talk about how to effectively use video on LinkedIn, what to do when you're engagement stops and why Mark doesn't swear (a neat conversation, indeed!).

Why I Don't Check Email or Social Media on Saturdays 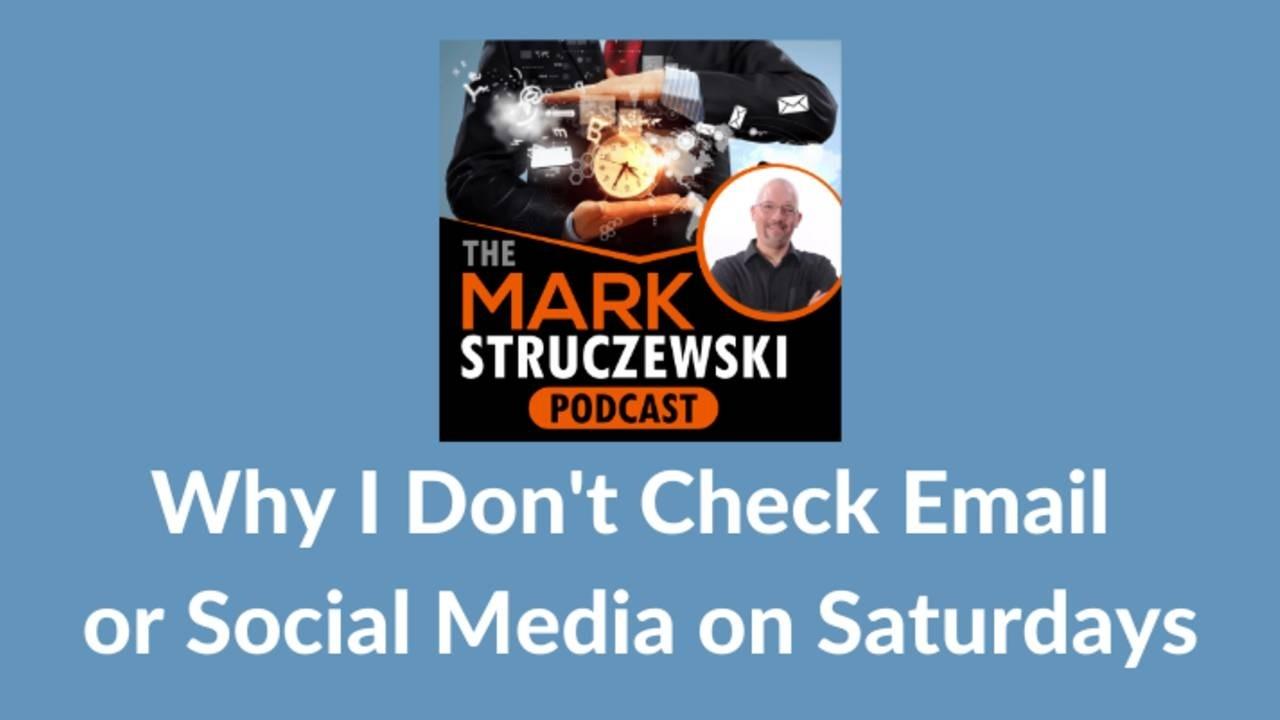 It all started on Christmas Eve 2019. It was then I had the crazy idea of not checking email or social media on Christmas Day. Now, I do this once a week. Let me tell you why and the results.

What's Keeping You From Being Your Most Productive Self - Ron Webb 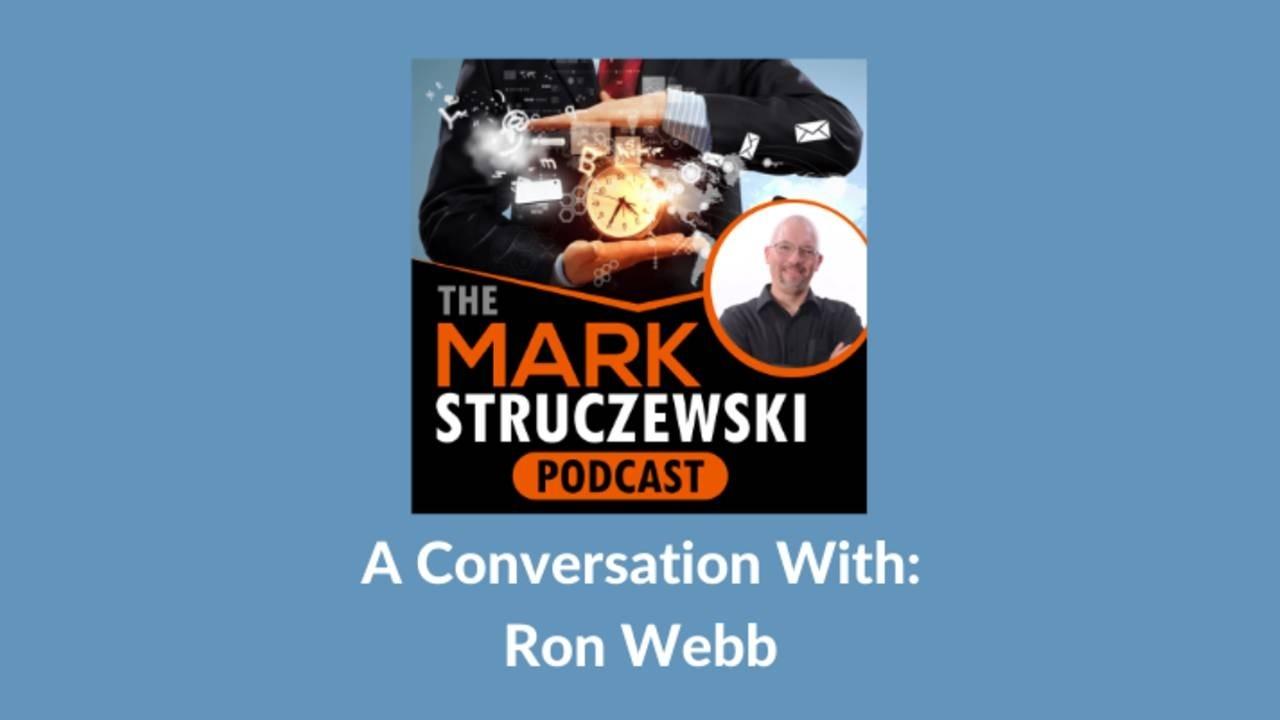 Ron Webb likes solving really big problems, especially with a team that takes self-accountability seriously and wants to solve the big problems, too.

On this episode, we talk about accountability, confirmation bias, negative talk, roadblocks to productivity and how to use the snooze feature on email.

How to Seriously Get More Done

On this episode, I'm going to teach you four big ideas on how you can seriously get more done now. Chances are really good that if you're watching this video or listening to this podcast, you want to become more productive. But maybe you don't know how. Maybe you're trying different things. You're following different thought leaders, and you're saying, "maybe this episode, maybe this podcast, maybe this video is going to give you the strategies on how to become more productive." I certainly hope so. That's my goal.

And the exercise I have for you is called the ODAE exercise. ODAE is an acronym that stands for outsource, delegate, automate, and eliminate.

So here's what I want to do. Over the course of two or three days, I want you to write...

Join the Mark Struczewski Insider and learn how to be productive in our increasingly distracted world.